With Cartuna, I recently directed and animated on Nickelodeon’s first ever SpongeBob 360 two-dimensional animation in 360! Thanks to an amazing crew of artists and animators, we pulled off a pretty seamless feat of animation engineering. We re-drew/inked/colored all of the original frame-by-frame animation on a equirectangular layout with any perspective shifts that were required.  Any future 360, 2D animators…study your perspective!  You’ll need it.

My experience working as a freelance animator in New York City has continued to be an important part of my teaching.  These branding shorts were created in 2016 for the Brooklyn-based Cartuna production studios with the color assistance of two graduate students, Manuel Moreno Lee and Luke Polito. I did all the animation, and Manuel and Luke pitched color scripts for their assigned clips that I would review. The Cartuna Idents became another project that allowed me to expand the walls of my classroom to encompass “real world” work, and to give my students access to professional experience and feedback.

This series also led to another Cartuna opportunity for undergraudate students who I hired through the studio in the summer of 2018 to independently create more idents with professional feedback but minimal supervision by me.

These idents have been featured on Cartuna’s social media accounts, where they have been viewed tens of thousands of times. 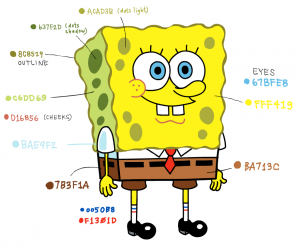 Daniel Shepard, Head of Animation and Development at Cartuna:

“Thanks so much for knocking out the bumpers. They’re awesome. We like one of them so much that we’re planning on making it our title card for the time being. “

“…with the help of Professor Blanchard’s connections in the industry, I along with a couple classmates, were able to work on several freelance projects, all of which provided us with crucial experience as animators.  Throughout the entire process, she was incredibly supportive, and provided me with tips and lessons to better understand how to be good animator and how to interact with clients and was always available to advise us.”