At a celebration of life for a mutual friend, Henry Padron, a former Rochester Public School Kindergarten teacher, approached me and asked if I’d be able to paint a mural in the children’s bookstore he was opening in the South Wedge (I was a commercial mural painter for over a decade.)  Henry’s enthusiasm for the project, along with his dedication to making diverse and non-traditional books available to our community, made this project impossible to resist.  I spent the entirety of my 2019 Spring Break on a ladder painting four walls with roots and beanstalks, but what better way to say good-bye to winter?

Excerpt of Letter from Henry Padron:

Pamela and I were excited to have met MJ and to help her in any way to move from the concept to finished product. An underlying factor for us was to do something in honor of a mutual friend who had passed away.

…When the day finally arrived we met at the store and MJ began sketching, mixing colors, and converting a blank panel into a focal point in the store. She stayed late into the night working on the piece. We had to leave and left her with the keys to work when she had the time… We could see the mural coming to life and it was beyond what we expected!

We were blown away when it was completed, had books mounted on it, and we were ready for the public to begin flowing in the store. There have been so many comments that patrons shared and stories that we have told about its creation. It is a powerful tribute for our friend and also reflects the natural world that we wish to honor in our store. Her choice of colors is earthy and one can see the roots that hold everything in place. A true tribute to Pachamama.

Hipocampo Children’s Books would not be the same without it! 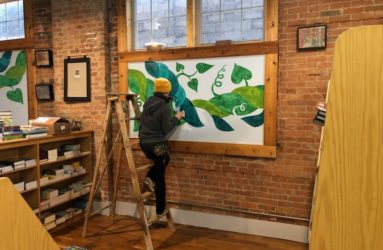 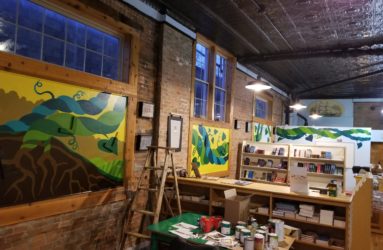 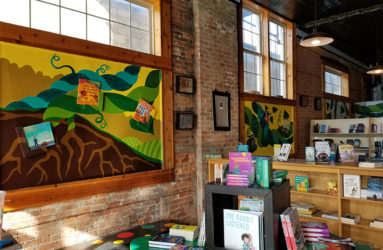